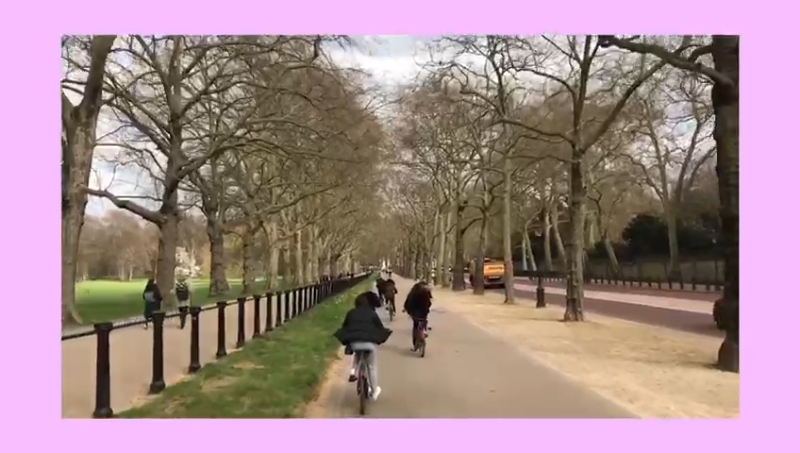 It seems cycling around London has become a recent favourite. In the Easter Holidays, the young people took to the streets; starting off at Granary Square, the young people began their park-hopping-on-bikes adventure. With portable speakers, they danced their way through Regents Park, Kingston Gardens, Hyde Park, Green Park, and then finishing off with lunch in Leicester Square.
The next day, everyone felt the effects of the bike. With plans to be out and about, the miserable weather and muscle pains turned the day into a movie day. Some young people entertained themselves with painting an area with chalk paint, while the others sat in and watched movies.

The second week of their Easter holiday the young people got off to a little orienteering challenge disguised as a very belated “Easter Egg Hunt” around the estate. However, instead of collecting eggs, they were challenged to collect letters that made jumbled words in which they would have to later decipher. Since Easter egg chocolates were no longer on sale, a simple trip down to their local shops was suitable enough for them to satisfy their sweet tooth.

Project Director – Stephen Griffith – has been invited and is now a member of the ‘Social Emotional Mental Health Partnership’; a network overseeing mental health provision for children and young people in Camden and Islington. Four young people from CYP with lived experience of mental health services are currently being supported as an advisory board to help develop such appropriate services.

As well as that, CYP is currently being redecorated to be even more conducive to positive mental health & wellbeing. In the Easter Holidays, local artist Levi Naidu-Mitchell has started designing a mural alongside CYP members. The mural is entirely youth-led, with young people working together to turn a plain, white wall into a work of art the represents them. There might be too many ideas to fit in one piece of work, but who says we don’t love a challenge?

Over the past few weeks, young people have had the opportunity to participate in the making of a new film, ‘Trapping,’ written and directed by CYP’s patron Penny Woolcock and esteemed film-maker Femi Oyeniran. The crime drama will feature rappers Lavida Loca and Abra Cadabra and will be filmed around Cally. Keep an eye on our website for more information.